cpearson1342 said:
Nope, it's manual, only the crank comes forged in the manual machs, not the rods or heads.

Sent from my SCH-I535 using Tapatalk
Click to expand...

Dang, at least the crank is forged...
I will check out some of your other threads too for wiring.
Thanks in advance for the wiring help.

Latest purchase is actually my whole project!
It's an 86 mustang gt with a t5 swap
Currently getting ready to paint it here in my garage. Colors going to be Royal Blue

Danetbra63 said:
Latest purchase is actually my whole project!
It's an 86 mustang gt with a t5 swap
Currently getting ready to paint it here in my garage. Colors going to be Royal Blue
Click to expand...

Start a build thread when you get a chance.
M

just order a wing today for my vert. cant wait to get rid the the granny rack

mitch said:
just order a wing today for my vert. cant wait to get rid the the granny rack
Click to expand...

I built an 85 years ago for my father-in-law. I put a Steeda wing on it. Shortly after I gave it to him, we put the rack back on, because he didn't like the sound of the wing when the top was down.

Staff member
Donator
Picked up a couple of Accel 14008 coils to install. Tune up time

Staff member
Donator
So, I came across a C&L Plenum pretty cheap recently. It is dirty and didn't come with gaskets, but at 1/3 of new, I think I can handle that. I also picked up a used Steeda Tri-ax for a T45. I haven't decided which car they will live in, but might do that this next weekend.

Staff member
Donator
So, some of you know I bought a 97 GT Convertible from my father-in-law for $500 about a year ago. He had loaned it to my nephew for a couple of months, as the nephew burned (couldn't be bothered to fix a minor fuel leak) the 85 conversion convertible that I built for my father-in-law for Father's Day (the car that got me involved in modmotor swaps to start with 15 years ago). Anyway, the nephew dragged it with low oil and threw a rod straight down through the oil pan. I anticipate getting it into the garage (for the first time since I dragged it home) to start pulling the engine this week. I have an 03 GT engine with low-ish miles. I'm posting it in this thread, because I've been spending money like it belongs to someone else. The 97 is triple black (paint, leather, top) and to be my wife's toy once complete. I know, it isn't a Fox Body. She doesn't care for the Fox Body Mustangs (been fighting that fight for 36 years). It is times like this that I miss owning a speed shop. Not having all the big tools and paying retail for parts from former competitors really does suck.
M

Donator
I have a huge pile of parts here.
This COVID thing is screwing everything up- parts are taking forever to arrive, half the stuff is back ordered, etc.
Today I got a new dome light cover and 2 door striker bushings.
door lock knob bushings and drain plug kit are backordered.
Oh and a huge piece of 14 gauge sheet metal to make some repairs.
It’s slowing down my progress for sure

Staff member
Donator
My latest acquisition. I acquired this when I removed the x-brace. It and a piece of the block were sitting on top of the brace plate. This changes the story a bit, as it is clear it was a piston skirt failure, not a rod bearing. Maybe I need to start us a thread about your latest carnage.

Staff member
Donator
I bought this for my current project, but it is something I think would work nicely on a fox project as well. It is an X-brace from an 03/04 Cobra Convertible. The front four bolts attach to the center of the K-member. The middle two attach to the rear edge of the k-member. That bottom corners are actually compound shaped cups that bolt from multiple directions to the bend in the front subframe. The 97 convertible I'm building for my wife has a damaged K-member and X-brace. I have 01 Cobra front end from a previous project to put on it, and will install this brace, which came with hardware for $100 shipped on ebay. It needs cleaned and painted, but I think that is the least of my worries under that car. 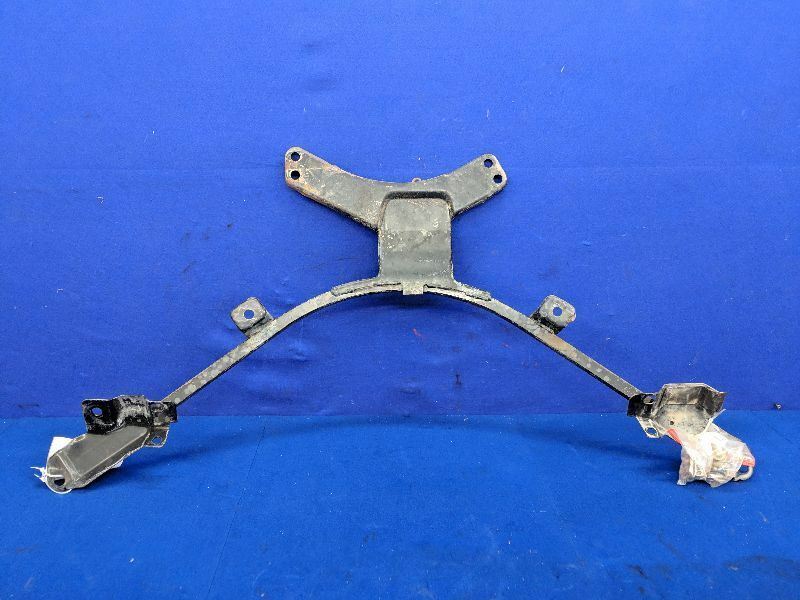 Staff member
Donator
Bit the bullet and bought a rebuilt T45 today. I typically buy low mileage used assemblies, but decided I wanted a warranty. I looked at the stuff that was available within 90 miles of me and didn't see anything I want to trust. I like to see what it came out of if I'm going to install it. I paid $795 shipped from Allied Gear in San Antonio. I'll let you know how it looks when I get it. It will be coming UPS Ground. I haven't decided what I will do with the one that I took out. I don't know that there is anything wrong with it, so it might just go into corner of the garage. They have a $250 core charge, so I may sell it.

EDIT: I'm a little pissed off at these guys. They messed around for three weeks and made me get eBay involved to get my money back. They never shipped the tranny. I still don't have the core charge back as of 6/14. I will be raising this issue with them on Monday.
Last edited: Jun 13, 2020

Staff member
Donator
I scored a new radiator for the vert today. New in box $60. The box was covered in dust. The guy said he had bought a bunch of them years ago as an overstock sale and only had two left. Not a bad price for an NOS part.

Bill said:
I scored a new radiator for the vert today. New in box $60. The box was covered in dust. The guy said he had bought a bunch of them years ago as an overstock sale and only had two left. Not a bad price for an NOS part.
Click to expand...

Turns out it is also an automatic radiator. I don't really care, as the PI will not be a high heat producer. My issue with the one that was in it being for an automatic was that they didn't cap or flush the passages, so it corroded and made an ugly mess.
M